I had a new UPVC door fitted a few years ago, I say UPVC but it was actually a composite door (whatever the difference is)

Jump forward a couple of years and it’s dropped on the hinges and doesn’t shut as well as it should.

I got in touch with the suppliers told them I think it needs new hinges so they said they would send someone out.

Bare in mind they supplied the door, know exactly what door it is and I told them I suspect it needs new hinges.

Anyway a week later than when they said they would be coming a locksmith arrives, sits in his van for 15 minutes drinking his tea and reading his paper, then gets out, comes and looks at the door and says “it needs new hinges”

He then goes on to say he hasn’t got any on his van and will have to get some.

A 2 minute look at the door and telling me I need new hinges, which is exactly what I said to them on the phone.

Hence I still have a badly fitted door as I’m not paying a company like that another penny, especially as I had £5k of double glazing of them and also recommended them to others who had their windows done by them

Luckily, I’ve been working on a website for someone who does UPVC Door Repairs in Birmingham and Warwickshire so will hopefully get him round after Christmas 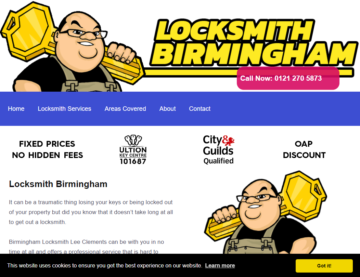 Warwickshire based supplier of Wheelchair Ramps